The musical skies are glittering with many stars and one star among them, is vocalist,  Dr. Uttara Chousalkar. A rare combination of a mehfil researcher and a mehfil performer she has a deep insight into the concept of performance. She is an artist with a creative mind, who has mastered the art and gains happiness through the presentation of her art.

She has been performing since the tender age of twelve. Numerous awards from all over India are also to Uttara’s credit. She has had the privilege of being under the able tutelage of the renowned vocalist, Late Dr.Smt.Sushilaji Pohankar for more than two decades. Smt.Sushilaji, who had a keen sense of aesthetics and a passion for creativity in music, gave Uttara a vision into the fineries of classical and semi-classical vocalising and all along groomed her in the“ Guru Shishya Parampara ” .
The blessings of her revered guru have made Uttara a Sadhika in a true sense.Uttara has also learned bandishes from Pt.Shankar Abhyankar  widening her repertoire.

An artist with a sound academic background, Uttara graduated in English Literature. In 1992, she acquired the master’s degree in music and the title Gaana-Hira was conferred upon her for ranking first in the S.N.D.T. Women’s University’s music faculty.She is also a graduate in Library Science. A U.G.C. fellow, Uttara was awarded a doctorate degree in music by S.N.D.T. Women’s University Mumbai in 2003.
A.I.R. has been broadcasting Uttara’s recitals on a regular basis since 1993.She  is a regularly featured artist on INSYNC Music Channel on TV.

The creative urge in her has led Uttara to compose music for Marathi plays,“Waatewarati Kaachaga”, based on the sensitive issue of child abuse and “Aasawanchaa Yeto Vaas”, based on the issue of child labour.The tunes set by her to the poems of the Marathi poetess Indira Sant have been widely appreciated and acclaimed by the press.
“Krishnanaad”, a thematic baithak conceptualised by Uttara, displays her talent in classical, semi-classical and folk genres of vocal music . 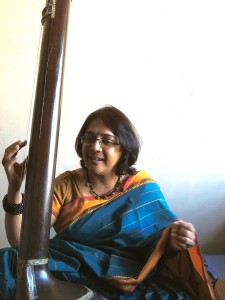 Uttara has also designed “Surmohi”, a concert of the compositions of her guruji Dr.Smt. Sushilaji Pohankar.

In a passionate pursuit of aesthetics in music, Uttara is also following the Baul music of Bengal. Interacting and seeking guidance from Smt Parvathy Baul and other Baul masters, Uttara has began performing Baul Music.
In her Baul performance she narrates the Bengali songs and sings and dances to the accompaniment of Ektara, Duggi and Anklets.

Uttara the youngest vocalist, at the IMG Young artist festival, showed a highly developed aesthetic  sense with an imaginative swaravistaar.

(The Time Of India, Mumbai).

Uttara’s vocal recital at the 20th concert of Sangeet Sankalp at the Punjabi University, Patiala was a delight to the audience

Uttara has a substantial voice of volume and melody. She presented an accurate draft of the raga Marwa.